Psychological thrillers are hugely popular at the moment although regular readers of my reviews will spot that they don’t feature often on Crimepieces. It’s not that I don’t enjoy them, it’s just that they tend to get pushed to one side by all my other reading commitments. However, an event at Waterstones in Liverpool and an early proof of CL Taylor’s next book gave me the opportunity to indulge in this genre.

Little Deaths is Emma Flint’s debut and has recently been long listed for the Bailey’s Prize. It’s the story of Ruth Malone who comes under suspicion of killing her two children by authorities who disapprove of her lifestyle choices. Based on the true life story of Alice Crimmins who was imprisoned for a similar crime, Flint looks at collusion between newspapers and police, the attitude towards women who don’t fit into ideals of motherhood and how an injustice can result in a woman’s imprisonment. The book is beautifully written and perfectly balances the story of the crime and wider social issues.

Motherhood is also a feature of Good Me Bad Me by Ali Land. However, the mother is a serial killer whose daughter, Annie, shops to the police. Annie is fostered and becomes Milly, staying with her counsellor as she awaits her mother’s trial. The book is an exploration of how childhood abuse leaves its mark on a person and, as Milly’s court appearance approaches, the tension ramps up as the full extent of this damage is revealed. Good Me Bad Me is a compelling story that I read in almost one sitting. It was literally unputdownable.

The Escape is CL Taylor’s fourth book but my first read by this author. It’s a great example of how tension can be gradually ratched up to make an enthralling denouement. A stranger who asks Jo Blackmore for a lift in her car reveals she knows Jo’s husband, Max, and has a glove belonging to their daughter, Elise. What follows is a nightmarish scenario where Jo’s assessment of the danger she is in is ignored and she comes under suspicion of kidnaping her own daughter. Like with all the best thrillers, you’re rooting for the protagonist and desperate to know how the plot ends.

Three great examples of how alive and diverse the genre is and a refreshing change from my usual crime reads. 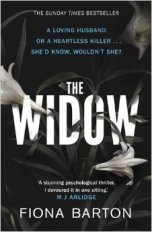 The Widow is a book everyone’s been talking about this year. It seems to have divided some readers but I found it to be an engrossing read with a slightly old-fashioned feel which I liked. I met its author, Fiona Barton, at a recent event and she spoke eloquently about how she came to publish this, her debut novel. The plot has a deceptively simple premise: a woman whose dead husband is believed to be a child murderer is now able to speak out to the press about the accusations levelled against him. How much does she know and does she believe in his guilt?

The book has a split narrative. Jean is the wife of Glen a delivery driver who police believe is responsible for the kidnapping of two year-old Bella. Now that he is dead, she is persuaded to tell her side of the story to a newspaper. Reporter Kate Waters is adept at getting her interviewees to reveal more than they expected but Jean is a complex character who has buried the truth deep down within her. The reader is also introduced to detective Bob Sparkes who has led the investigation into Bella’s disappearance. His inability to find her, dead or alive, has meant him being sidelined in his job and pilloried by the press.

The Widow is one of those rare books where I enjoyed each narrative voice equally. I think this was largely because of the strength of characterisation of Kate, the intrepid reporter. Fiona Barton has worked as a journalist on national newspapers and clearly has a in-depth knowledge of the industry. Kate is portrayed as both determined and compassionate with a sceptical view of Jean’s story. Jean is a woman from a different generation. She has come depend on Glenn completely and believes his excuses. Or so it seems. For Jean also has hidden depths to her.

It was a certainly a page-turning read. There’s something compulsive about Jean’s blindness to Glenn’s activities and we, as readers, are desperate to know what happened to Bella. It’s a horrible subject matter but Barton doesn’t go into unnecessary detail. A book that, for me, lived up to the hype.