January, a miserable month for us living in the northern hemisphere, was redeemed by some excellent crime fiction reading. I read 10 books for crimepieces and perhaps because there was a stong Scandinavian presence, the common theme seemed to be murders set to the backdrop of freezing winters. However, the highlight of my month was set in a much warmer climate, the Australian Desert. Gunshot Road by Adrian Hyland combined sparky writing with a great sense of place and one of the best female detectives around.

The books I read in January were:

1. Death and the Spanish Lady by Carolyn Morwood. (completed as part of the Australian Women Writer’s Challenge).

3. The Winter of the Lions by Jan Costin Wagner

4. Believing the Lie by Elizabeth George

6. V is for Vengeance by Sue Grafton (also reviewed for crimesquad.com)

7. The Mask of Glass by Holly Roth

8. The Final Murder by Anne Holt

Kerrie over at Mysteries in Paradise is hosting a meme summarizing the crime fiction recommendations for January 2012.

I had an exciting Christmas present from Chris Simmons at crimesquad.com. Six vintage penguin crime books and all by women 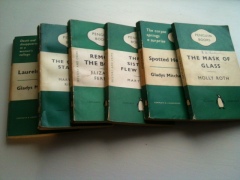 too. Last night, looking for something to read I idly flicked through the opening paragraphs of each of the books. This is the one that grabbed me: ” This is the story of how a middle-aged spinster lost her mind, deserted her domestic gods in the city, took a furnished house for the summer out of town, and found herself involved in one of those mysterious crimes that keep our newspapers and detective agencies happy and prosperous.” There was something irresistable about the opening line and happily it was a foretaste of things to come.

The central character is Rachel Innes, the middle-aged guardian of her orphaned nephew and niece, Halsey and Gertrude. She decides to rent a large country house for the summer and on the second night of her residency a man is found murdered. As the investigation into the killing progresses the house becomes the focus of increasingly strange activities and further unexplained deaths.

I have to admit I was a completely ignorant of the writings of Mary Roberts Rinehart and read it without any preconceptions. What immediately struck me was how modern the book was. Written in 1908, in England this is the period of Sherlock Holmes and Raffles and the Victorian era has not yet been shaken off. However, in the US, Rinehart wrote this book which seems to me to be firmly set in twentieth century America. Embezzlement, revolvers in the shrubbery, young women fleeing across the country by railroad. This is a country house mystery you couldn’t have written in England, although there is a whiff of Victorian (Wilkie Collins) melodrama about the plot.

The books greatest strength is the narrative voice of Rachel Innes. She is wry and self-deprecating, well aware of her limitations and strengths. There was one aspect of the narrative that I initially found distracting which was the continual references to events in the future – identifying characters for example who will play an important role later in the book. A quick search of the internet this morning reveals that Rinehart was the inventor of the ‘had-I-but-known’ type of mystery where the first person narrator hints of impending disaster that could have been averted if they had been equipped with knowledge that is later acquired. I didn’t find it irritating in this book but can understand how it could easily become a cliché.

I liked the sense of irony and the glimpse of a world that I don’t often read about. I’m not sure how easily available the other books are but I’d definitely like to read her again.

There’s a good review at Redeeming Qualities by a blogger who has read more of Rinehart’s books.