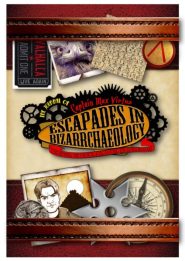 This is the  final post in this series where writers have been sharing the music they write to. Today I have Adrian Burrows who has written a  history book for people who don’t like history – yet. In Escapades in Bizarrchaeology you can discover why bats were used as bombs, how an emu can defeat a tank, the reason why guns were installed in cemetries … and how you can get shot with an arrow … and survive.

Hi Adrian do you have particular pieces of music you write to?
My favoured way of listening to music is by being surprised. Now by this I’m not suggesting that my undersized man servant (who is trained in martials arts of course) leaps out of my fridge freezer to karate chop me in the back of the neck whilst I listen to some Beethoven. Instead I mean that I find a mood list on Spotify, set it to play and just see what happens. On one particular afternoon (possibly a Tuesday … or a Wednesday … or a Thursday … or a Friday … erm … it was definitely a day of the week anyway) I found a rather enjoyable album of piano jazz. It was very plinky plonky (I’m pretty sure that’s a way to describe piano music), with some delightfully complex compositions and a flowing melody that was certainly aiding me brain in doing that whole writing thing. It was with some surprise when I discovered the person who wrote and performed this 9 track album was only 11 years old! His name is Joey Alexander and in a third of my life he learnt to play the piano, compose music, and then went on and wrote, performed and recorded a best selling album. Which didn’t make me feel inadequate at all. Honest.
Has a particular piece of music ever inspired you to write something?
No.
Wait, I should probably expand on that answer …
Yes and No.
I haven’t written something that has been inspired by a piece of music … yet, however, a piece of music has given me the idea for a short story that will become my first piece of fiction. The song is torn apart – the Joe Ford remix and it’s a track with two very different personalities. Which gives a little hint about theme of the short story!
Could you recommend any particular pieces of music for a specific mood? I use Holst’s ‘Mars the Bringer of War’ for example to write angry passages.
I wasn’t familiar with Holst’s ‘Mars the Bringer of War’ so I decided to listen to it, then I realised that I was very familiar with the piece of music I just didn’t know the title of the piece or the composer. I don’t know if that makes me uncultured or forgetful … definitely one or the other but I can’t remember which. For my own recommendation, it has to be ‘How do you like me now? – The Heavy’. When writing history and trying to make it both fun and funny you need music that is funky and upbeat. This track provides all that and is so darn catchy that you’ll be tapping your keyboard to the music!
Are there any longer pieces you can recommend? If you need to write for an hour, for example, is there a particular composer/artist you’d chose?
I certainly can. Don’t let me be Understood / Esmerelda Suite by Santa Esmerelda and Leroy Gomez. It’s an album that consists of only one song (unsurprisingly, considering the name of the album, that’s the song Don’t let me be Understood, the 1977 disco remix of the Nina Simone original) remixed 7 times for a total of 1 hours and 10 minutes of the most toe tapping enjoyable music you’ve ever heard. Although you should use great caution in choosing to listen to this album whilst writing, as I challenge you not to spend most of the 1 hour and 10 minutes clapping your hands together to the chorus rather than actually typing. Which is why it took me so long to write my first book. If only I could write by clapping I’d have already written 5 bestsellers.
What are you working on at the moment?
I’ve just finished putting the finishing touches to ‘Escapades in Bizarrchaeology: The Journals of Captain Max Virtus’ its a history book for people who don’t like history … yet.

The book is intended as a history book for people who are traditionally not interested in history. I’ve researched eras as diverse as Ancient Greece, World War 2, Pirates, and Rome, then gone through all the boring bits, got rid of them and hopefully what I’m left with are the parts of history that are weird, bizarre, fun, shocking, moving and most importantly of all; fascinating.

The book is written in first person under the pseudonym and in the character of Max Virtus. He’s a Captain of Bizarrchaeology, an ancient form of archaeology that focuses on unearthing the unusual and excavating the extraordinary. He’s been compiling all of his discoveries and placing them in a giant warehouse, creatively titled ‘The Warehouse of Bizarrchaeology’ and the book will take the reader on a tour of this fascinating place.

The reader will discover why bats were used as bombs, how an emu can defeat a tank, the reason why guns were installed in cemeteries … and how you can get shot with an arrow … and survive. All that … and then things get really weird!
Thanks Adrian for taking part in this series. The book sounds fascinating. Good luck with your writing.

One Reply to “Music to Write Books By – Adrian Burrows”