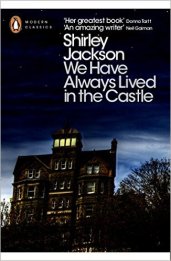 We Have Always Lived in the Castle  is a difficult book to categorise in terms of a review. I read it under the auspices of a ‘forgotten’ crime book but it’s since become clear that Jackson certainly hasn’t been forgotten by her readers. She’s been cited as influence on writers as diverse as Stephen King, Donna Tartt and Neil Gaiman and it’s not difficult to see why. The book opens in the Blackwood family home and Merricat preparing for a shopping expedition into town. She’s despised and mocked by the local community and it’s revealed that the isolation she lives in with her sister Constance and her Uncle Julian is the result of her sister’s acquittal of the murder of the rest of her family years earlier. When Cousin Charles comes to visit with designs of the family fortune, Merricat is determined to protect the fragile stability that they’ve created inside the imposing home.

This is an impossible book to review because much of its greatness comes from the second half where there are shocking reveals and touching gestures of humanity. Merricat is portrayed as an innocent, cooped up in the house with two eccentrics who live life much as before ignoring the world outside. Tension is introduced into the story through the guise of a shady cousin who although blustery in character at least has the vestiges of normality about him. For much of what you read is smoke and mirrors and a shocking act moves the book in a different direction than expected.

It’s hard to compare this book to any other. I’m sure Stephen King fans will love it but it’s also a work of literary fiction where plot strands remain open. The afterword by Joyce Carol Oates is fascinating and perfectly placed (I hate forewords that give away the plot).

If you’ve not tried any Shirley Jackson here’s a deliciously creepy place to start. On the strength of this I’ve ordered The Haunting of Hill House because I’m pretty sure she’s going to be a fantastic writer of the supernatural too.

16 thoughts on “Review: Shirley Jackson – We Have Always Lived in the Castle”