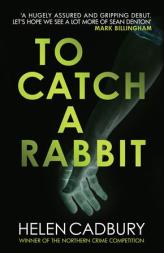 I met crime writer, Helen Cadbury when I appeared with her on a panel at Newcastle Noir. We had a fascinating discussion about the importance of setting; Helen’s books are located in South Yorkshire and it was a delight to read a novel that had a such a strong sense of place.

The author takes a classic police procedural structure and gives it a modern twist. The protagonist of her book is Sean Denton, a Police Community Support Officer. This immediately gives us readers a sense of a community that we live it. PCSOs are, for many of us, the face of modern policing and in Doncaster they’re at the front end of what happens on the street. In To Catch a Rabbit, Denton finds a dead woman slumped against a trailer. CID are reluctant to investigate and the PCSO decides to take matters into his own hands.

There’s always something fascinating about police personnel who go off-piste, the sense that danger lurks not only outside the force but also within. This is also true of Denton’s investigative efforts which gives the book a strong urban feel. I’ve never been to Doncaster but the city comes alive in the author’s writing. It’s recommended as a ‘literary crime novel’ and I have to say that I wholly concur. To Catch A Rabbit  was a worthy winner of the northern crime competition and I’m looking forward to reading the next in the series.

6 thoughts on “Review: Helen Cadbury – To Catch A Rabbit”