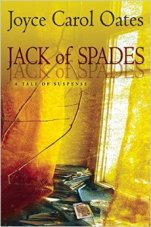 I’m currently trying to intersperse my crime fiction reading with something a little bit different. I love mainstream crime novels but there’s so much out there it can be hard to decide what to read. Jack of Spades by Joyce Carol Oates caught my eye because she’s more famous as a writer of award-winning literary fiction. The lines between what is literary fiction and genre novels has, of course, been blurring for years. But in Jack of Spades, Oates has written a deceptively straightforward thriller that was a delight to read.

Andrew J Rush is a well-known and commercially successful writer of mystery novels. He and his wife are well-respected in the local community and he is a generous benefactor to the arts. However, unbeknown to his family and publishers, Andrew also writes dark masochistic novels under the pseudonym, Jack of Spades. When, one day, a court order arrives accusing him of plagiarism, Andrew turns to alter-ego to plot his survival.

This is a slight book, only 224 pages, but perfectly suits the narrative. There are Jekyll and Hyde references: the urbane Andrew who professes outrage at the impending lawsuit and the dark Jack whose initial fight to maintain his reputation sparks a lust for killing. The crime element to the book isn’t particularly unusual but, perhaps with a nod to Stephen King, it’s Andrew’s descent into madness and the impact it has on his bewildered family that is so memorable.

Jack of Spades is something a bit different. Impeccably written, of course, it explores the nature of creativity and literary jealousy. There’s a splinter of ice in many writers and Oates not only recognises this but tests the extremes people will go to protect their hidden lives.