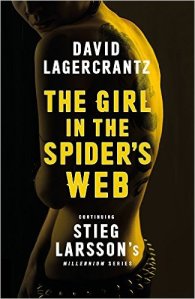 Here’s a book that I viewed with mixed feelings. I’m not greatly enamoured of writers taking on the characters of other authors and I tend to give the books a miss. I made an exception for The Girl in the Spider’s Web for a number of reasons. Firstly I enjoyed Lagercrantz’s Fall of Man in Wilmslow that was published earlier this year and think he certainly knows hows to tell a good story. I also wanted to give the book a fair assessment for the 2016 Petrona Award for which, as a Scandinavian translated crime novel, it’s eligible. And I wasn’t disappointed. I thought the book to be a decent crime novel that, in my opinion, is better than the last of Larsson’s trilogy, The Girl Who Kicked the Hornet’s Nest.

A famous Swedish scientist, Professor Balder, contacts investigative journalist Mikhael Blomkvist, to say his life is in danger from a group who call themselves the Spiders and he want’s Millenium, Blomkvist’s newspaper, to publish the story. The professor reveals he has been working with Lisbeth Salander to discover what computer files are available to back up his story. But Salander has her own mission, to hack into the US National Security Agency to discover the whereabouts of her sister who is still trying to kill her.

The characters of Blomkvist and Salander are immediately recognisable as Larsson’s creations. Once more, it’s Salander who dominates the narrative although Lagercrantz does try to give the character extra depth by showing the pain and conflict having a murderous sibling can bring. The other compelling character is Balder’s autistic son who is witness to a horrific act. The story of professionals attempting to tease out details of the criminals from his mind is never trite and detailed with subtlety.

It’s clear that this is a book written after the success of the trilogy. Salander has been described by commentators as a modern day super-hero and Lagercrantz picks up on this and develops the motif. But, apart from a dip in the middle of an admittedly long book, the action goes at a fair pace. It’s a worthy successor to Larsson’s work and a very enjoyable read.

Thanks to Quercus for my review copy.

17 Replies to “Review: David Lagercrantz – The Girl in the Spider’s Web” 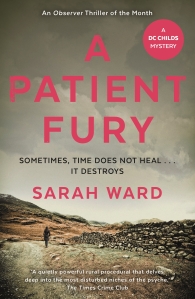