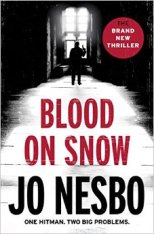 I’m a big fan of Jo Nesbo’s books. I know he’s not to everyone’s taste but I love the sheer readability of what he produces and, if I’m to be honest, the bloody nature of his narratives. He’s best known, in translation at least, for his series featuring the Oslo detective Harry Hole although I also enjoyed his two standalone books, The Son and Headhunters. Now, with the publication of Blood on Snow, we have a new series to enjoy and a new translator of Nesbo’s writing into English.

Olav is a ‘fixer’ employed by Daniel Hoffman to eliminate extraneous people from his life. When he is tasked with killing Hoffman’s wife, Olav’s only worry is whether he will be allowed to live afterwards, given the amount of dirt he now has on his employer. But when he catches sight of the beautiful Corina all thoughts of killing her disappear. He instead murders the man with whom she has been having a violent affair and sets off a chain of events that leaves him in the sights of two rival gangs.

Blood on Snow is an interesting book in that it provides many of the things we as readers demand from Nesbo. There’s often a lack of demarcation between the hunter and hunted and Olav finds himself in the position of needing to kill before he is killed. Nesbo has been criticised for his excessive use of violence and there’s plenty of gore here. It’s a difficult one because it feels an essential part of Nesbo’s style of prose and therefore not gratuitous. In fact, it was the sex scenes that were slightly awkward although these were partly explained in the plot’s conclusion.

Blood on Snow is a short book at 198 pages of quite large print. But it packs in plenty of action and, unlike some of Nesbo’s more recent books, feels resolutely set in Oslo. The translation was by Neil Smith who, as I’ve mentioned before on this blog, is my favourite translator of Swedish and Norwegian crime fiction. He’s done an excellent job with this new Nesbo and is busy translating the next book in the series. This, based on the blurb, promises to be an even more appealing read.