The second day of Iceland Noir was a more casual affair with delegates making the most of their free time to explore Reykjavik and the surrounding areas. I went on the Golden Circle tour that took in the geyser geothermal area and the waterfall at Gullfoss. Iceland is a seriously beautiful country and thanks to Jorunn and her team at All Iceland for organising the trip. I was also impressed by the esteem in which crime fiction is held in the country. On the right is an advertisement for Arnaldur Indriðason’s latest novel in downtown Reykjavik. In the evening, Icelandic writer Yrsa Sigurðardóttir hosted a party for Iceland Noir attendees which was a great opportunity to informally chat with writers, readers and other reviewers.

The main event kicked off at 10am on Saturday morning with the first panel of the day: What’s so special about the North? Moderated by English writer Quentin Bates, on the panel were Ann Cleeves, Jørn Lier Horst, Ragnar Jonasson, Sabine Thomas and Yrsa Sigurðardóttir. Attempting to unpick the popularity of Scandinavian crime fiction, Ann Cleeves suggested that the mixed communities found in small towns in Scandinavia (and Shetland) hark back to the days of golden age detective fiction. An interesting exchange, in response to a audience question, was the influence of other writers on their works. Yrsa doesn’t read at all while she is writing to avoid distraction while Ann Cleeves has to avoid the novels of John Le Carre as he has such as strong voice.

The second panel was an interesting discussion on transferring crime fiction onto the screen. The eloquent John Curran, who has published two books on Agatha Christie, was vocal in his disapproval of adaptations of Christie’s works that significantly alter the structure of the plot. A lively discussion ensued and it’s fair to say that those involved in filming detective fiction

take a more relaxed approach to the importance of maintaining the integrity of the original narrative than most readers would like. I’m 100% behind John on this one and can’t watch some adaptations of Christie’s work when they deviate so far from the original. A quick chat afterwards, however, revealed we both agree that the filming of ‘Final Curtain’ starring David Suchet was a fitting and moving end to the series.

The final panel of the morning was entitled A Sense of Time and Place and featured writers who set their books in Hull, Russia, Alaska and Iceland. Many of the panellists don’t live in the countries where they set their books and there came across a strong sense of stories that need to be told. M J McGrath referenced the vast amount to Innuit stories that remain unknown to the wider world. In contrast, Nick Quantill is a Hull based author who writes about the city he lives in, partly in an attempt to make sense of his surroundings. William Ryan, whose books are set in Stalin’s Russia revealed that his next novel will be a standalone thriller set in the Christmas of 1944 which should be an interesting departure for him.

So that’s a summary of the first three panels of the day. The final instalment of Iceland Noir will be coming tomorrow with more news from the main event. If was wonderful to catch up with old friends and make some new ones. In particular I want to direct you to a talented photographer that I met. Markús Már Efraím has a website entitled Literary Reykjavik that marries the images he takes at events with quotes from the authors’ work. I’ll be featuring more of his photographs on the post tomorrow but do check out his website and Facebook account. The images are wonderful and below are some he took of the readings that took place on Thursday evening. 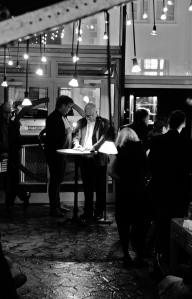 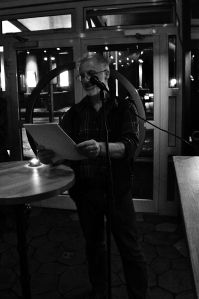