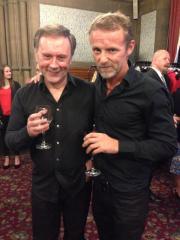 Last week-end was a crime fiction bonanza as I attended events in both Manchester and Scotland. I could have saved time by seeing all of the authors in Stirling as part of Bloody Scotland. However, I was keen to support the launch the Manchester Literature Festival by watching Jo Nesbo being interviewed by the excellent Barry Forshaw. I first saw Nesbo in Harrogate around seven years ago when The Redbreast had just been published. Since then he has achieved superstar status as evidenced by the tour he has been undertaking around the country to promote his latest book, Police. In Manchester, the event filled the banqueting room in the Town Hall with fans interested to know the impetus behind Harry Hole’s latest story.

For me, what was interesting was the writing process behind Nesbo’s lengthy books. Nesbo creates a long synopsis, up to 100 pages in length, and then proceeds to ‘damage’ it in the writing process. Police, which I’ve just started reading, was described by the interviewer as one of Nesbo’s most sexually graphic novels. This may, in part, be due to a need to counterbalance Harry’s sobriety in this latest book. I quite liked the sober Harry in Nesbo’s first book, The Bat, so it should make interesting reading. It promises to be a bumper year for fans of this series, with book 2, Cockroaches, set to be published in November.

Bloody Scotland, now in its second year, featured a wide range of authors from around the world. En route to friends in Edinburgh, I wanted to catch two Scandinavian writers who I haven’t yet seen: Arne Dahl and Mons Kallentoft. Despite arriving late for the Dahl event due to a horrendous M6, I found him to be a fascinating speaker and, again, the room in the Albert Halls was packed for his interview with Peter Gutteridge. Dahl also creates detailed synopses for his writing which helps shape his complex plot lines. His explanation for the popularity of Swedish crime fiction was interesting: that its style is close enough to British and American thrillers to be recognisable. I’ve just finished book 2 in the Intercrime series and can attest to the book’s complexity which is one of its greatest strengths. The review is to follow later this week-end.

Mons Kallentoft’s books are a personal favourite of mine. He seems to divide readers with his distinctive style and alcohol soaked female protagonist. I was interested to hear the background to Malin Fors’s creation. Looking at British crime fiction he liked the idea of a central character with a raft of personal problems and decided to use them in a female protagonist.  There is a stong sense of place in Kallentoft’s books but Linköping, the town where his books are set, was a place he couldn’t wait to leave as a teenager. As a reader, I am pleased to hear that in Kallentoft’s next book The Fifth Season which is due to be published next year we get to find out what happened to the rape victim whose case has been a preoccupation of Malin’s since the first book.

One common theme to all three interviews was the adaptation of their books to film and television. Nesbo’s Harry Hole series has yet to make it onto the big screen although the books have been optioned by Martin Scorsese. Arne Dahl’s Intercrime series, which has been shown on BBC4, is one of the reasons for the author’s popularity. I personally prefer the books to the series but I suspect I was in the minority at the event. Kallentoft revealed that he had turned down TV offers. Apparently  for every decent Scandinavian crime series there are plenty that are well below standard. BBC commissioning editors take note!

All three authors paid tribute to their English translators: Don Bartlett, Rachel Willson-Broyles and Neil Smith. The quality of English translations are, in my opinion, one of the reasons the books are so popular here. It’s good to know the authors recognise this.

Thanks to Barry Forshaw for sending me the photo of him and Jo Nesbo. As usual, mine were dire.