Adrian McKinty’s The Cold Cold Ground has been garnering some excellent reviews and after reading it in one sitting I can see why. 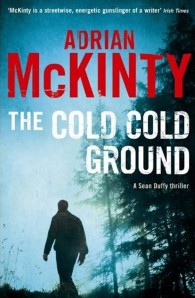 The story is set in 1981 in Northern Ireland during The Troubles with the newspapers full of the Republican hunger strikes in the Maze prison, the forthcoming royal wedding between Charles and Diana, the recent shooting of the Pope and the ongoing trial of the Yorkshire Ripper in England. It is a hugely evocative period and McKinty couldn’t have chosen a better time to highlight the political and religious disparities in Carrickfergus, the small port town where the book is set.

Detective Sergeant Sean Duffy is a Catholic RUC policeman living on a Protestant sink estate on the fringes of the town. When two homosexual men are killed, Duffy fears that a homophobic serial killer is on the loose despite his superior’s efforts to link the killings to sectarian violence. Duffy is also intrigued by the case of a missing girl, Lucy Moore. With an ex-husband on hunger strike in the Maze, when her body is found her death is ruled suicide despite unexplained marks on her neck and no satisfactory motive.

The book, I felt captured the mood of the period with the roadblocks, burning cars, and police visits to Catholic neighbourhoods in full riot gear. The book was an interesting mix of period realism and light-hearted cultural references to the early 1980s. So, for example, the reality of The Troubles with opposing paramilitary organisations carving up territory for their protection rackets was interspersed with references to popular music of the time. There were also some sly references to the future inserted into the book; the coming of the DeLorean factory designed to bring prosperity to the area and the date of armageddon prophesied by an evangelical preacher.

The character of university educated Sean Duffy had some interesting features. His sexual encounters were slightly out of the ordinary but fitted in with the tone of the book. I’m not normally keen on real people popping up in fiction but here the larger than life personalities would have been hard to ignore. The presence of Gerry Adams, for example, gave the book a solidity so that we weren’t just dealing with a fictional murder but also the realities of political life at the time.

The MI5/Special Branch characters were also interesting, more ‘Our Friends in the North‘ than George Smiley. They ranged from the man in the tweed suit to the stony faced thugs but I’m never sure if either of these types are representative of the personalities of the British Security Service. I would have preferred if the book had ended before Duffy’s trip to Italy but appreciate the final ending ultimately showed the complicity of those in authority in many of the events taking place.

Ultimately it was impossible to put the book down, as much for the crime plot as for the setting. It is the first in a trilogy and I’m looking forward to the rest in the series.

Thanks to Gemma at the Harrogate Festival for my copy of the book.

The book has been reviewed by many of the national newspapers and on-line at crimesquad.com, Petrona, Fair Dunkum Crime and Yet Another Crime Fiction Blog.