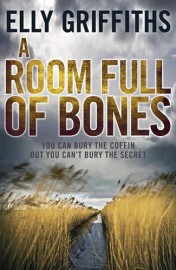 Nelson. Griffiths manages to leave the end of each book, if not on a cliffhanger, with enough suspense that you are always keen to see what happens next. The last book The House at Sea’s End had Michelle, the glamorous wife of DCI Harry Nelson beginning to suspect that Ruth’s infant daughter with an unnamed father is her husband’s child. However the author doesn’t plunge us straight into this plot strand but starts the book with the first death that Nelson has to investigate.

Ruth is scheduled to attend the official opening of the mediaeval coffin of a Norfolk Bishop. The prelate is also the ancestor of a prominent Norfolk family, headed by Lord Danforth Smith, who owns the museum where the ceremony will take place. Before the coffin can be opened however, the curator of the museum, Neil Topham, is found dead next to the sarcophagus. Although death is ruled the result of natural causes, Nelson’s interest is sufficiently piqued to look into the background of all the Smith family.

When a second person connected to the mediaeval bishop is found dead rumours circulate of an ancient curse that is affecting all those who come into contact with the body. Meanwhile a group of people are pressurising the museum to return the aboriginal skulls that have been languishing in the museum’s store. Led by the druid Cathbad, he once more plays a catalytic role when danger comes to both Ruth and Nelson.

After the previous three books, I found that I was reading this as much for the characters as the crime that Nelson has to solve. The protagonists are now settling down into their respective roles and many of the subsidiary characters of the previous books are given more substance in this one. These include Shona, now pregnant and living with Phil, Ruth’s boss and Nelson’s wife Michelle, who is given a much sympathetic portrayal as the betrayed wife struggling to come to terms with Nelson and Ruth’s previous relationship and the baby daughter who looks so like her father.

The actual murder investigation was interesting and became more complex than it initially appeared. I’m not sure I completely believed the background to either the deaths or to the subsidiary crime that the Smith family become embroiled in but it was an enjoyable read.

But the true strength of Elly Griffith’s writing is her focus on characterisation and the relationships that interweave between groups of people. She effectively conveys the hurt and complex feelings that can result from unthinking indiscretions and somehow these become integral to the narrative.

The book has been reviewed at Reactions to Reading, Eurocrime and Novel Heights.

17 thoughts on “Review: Elly Griffiths – A Room Full of Bones”