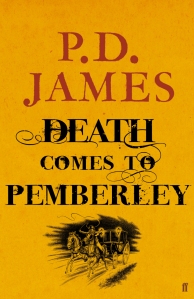 PD James has been a staple of my reading since I was a teenager. My introduction to her was Shroud for a Nightingale which has remained my favourite and I have re-read it a couple of times over the years. At the age of 91, PD James could justifiably consider her writing career to have reached its conclusion, and in fact her last book The Private Patient had an end-of an-era feel to it. Therefore I was surprised (and slightly dismayed) to hear that she was going to write a murder mystery set in Pemberley, the home of Mr Darcy in Jane Austen’s Pride and Prejudice.

I have to say upfront that I’m not particularly a fan of prequels, sequels or any tinkering of the classic texts (for example new Sherlock Holmes stories) by writers other than the original. I appreciate that they sell well, but surely creating new characters is part of the challenge of any writer, not utilising a ready-made ones. However, Pride and Prejudice is, after Persuasion, my favourite Austen novel and a mix of PD James and Jane Austen was just too irresistible.

As I would expect from PD James, the book was eminently readable. The book lacked a proper detective which was a shame but as we would expect from James the solving of the crime was nicely done. The writing style she adopted for this book was unusual, a cross between her own and Jane Austen’s, although predominantly Austen. I thought it a fairly faithful recreation of the feel of the original books although it did lack Austen’s sardonic gaze. Darcy and Elizabeth’s relationship, for example, was slightly saccharine, whereas Austen would have added a drop of bitter lemon.

I found some of the characterisation a bit hit and miss too. Naturally the chief suspect in the murder of the dashing Denny, an officer in Pride and Prejudice, is the scoundrel Wickham. This is fair enough. But James clearly doesn’t like the amiable Colonel Fitzwilliam and his portrayal in the book as the slightly predatory suitor of Georgiana I found wrong. I also didn’t like the reference to Anne Elliot, the heroine of Austen’s Persuasion. Austen is no Balzac. Characters don’t generally cross over novels and I found the references to a different book out of place.

Nevertheless, it was a delight to revisit the beloved characters of Pride and Prejudice. I’m not sure how much the book would appeal to those unfamiliar with the original although the first chapter is in effect a precis of the original plot. Judging by the discussions on blogs and twitter it seems Jane Austen fans have taken the book to their hearts and it has proved a hit with crime fiction fans too. It was a very enjoyable read over Christmas and made me think I ought to dig out my old copy of Pride and Prejudice despite its miniscule print.

For other (crime fiction) reviews see crimesquad.com and Reviewing the Evidence.